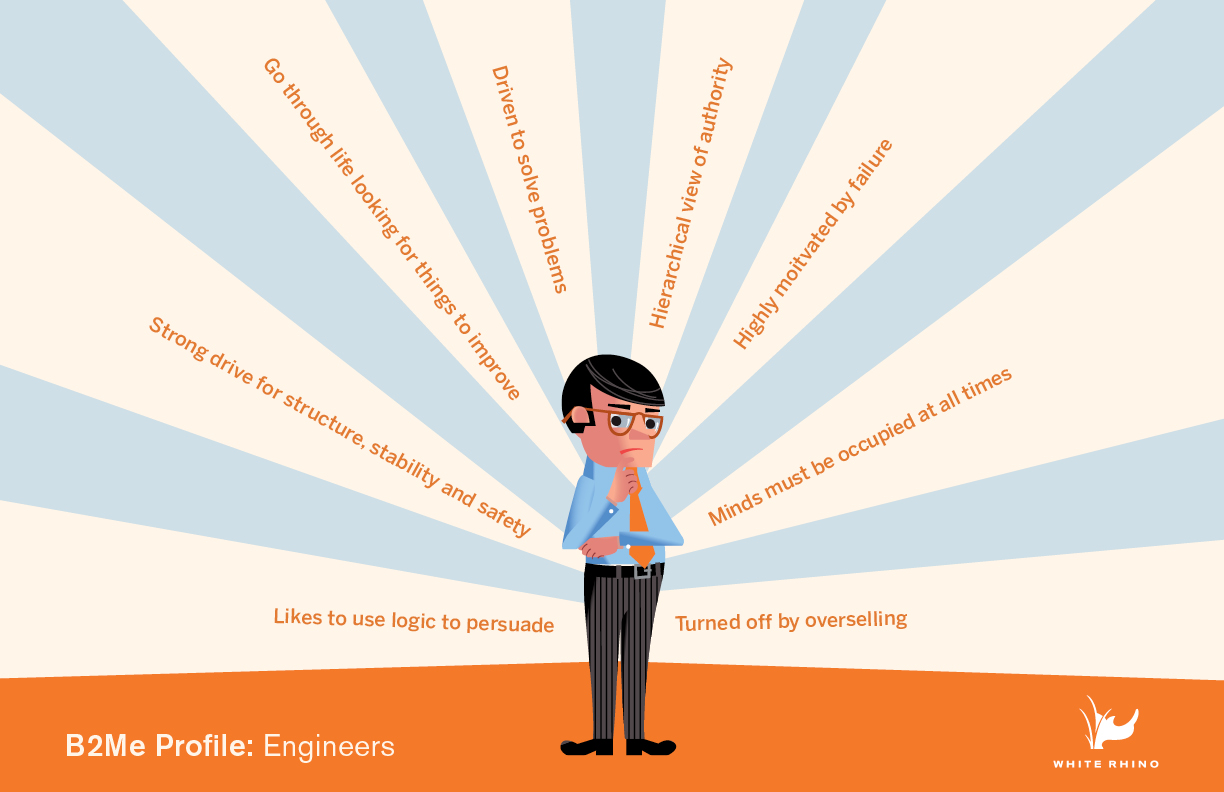 What makes one position seem like a dream job, and another one sound like a nightmare? From childhood we have tendencies that drive us toward one profession over another – such as how we interact with people, how we like to organize our time, and how we absorb information. If you were the kid who often fretted about getting lost, or being late, you’re probably a natural born organizer. Structure and planning are important. If you were the kid who spent hours making Lego creations only to get bored with them as soon as they were finished – I’d bet money that you became a designer or an engineer.

So why do so many marketers market to job titles, and not to the psyches behind the suits?

Many of our clients want to know that we have experience marketing to CIOs or to Facilities Managers or to Software Engineers. But really, that’s not the point. What’s important is whether we can understand the underlying characteristics that drive the thinking and behavior of a CIO. If we grasp this, we stand a good chance of motivating him or her as a potential buyer of your product.

When White Rhino was invited to promote engineering design software, our first step was to interview engineers. We didn’t ask them about software. We asked them how young they were when they realized they were engineers, and how they felt different from other people. The interviewees painted a remarkably consistent picture of themselves as people who don’t just see the world, but who are wired to deconstruct and improve it.

“My friend and I had an entire conversation on how we could improve the efficiency of a salt-shaker.”

“I don’t understand the mindset of people who don’t think like me.”

“My wife fills the dishwasher and then I reorganize the dirty dishes so more will fit in. It drives her crazy but I’m always looking for ways to make things more efficient.”

In short, engineers go through life looking for things to improve. This became the driving insight behind all of our creative. We designed a marketing campaign with plenty of hidden clues and scoreboards to appeal to engineers’ problem-solving skills and sense of competition.

We went through a similar exercise recently with client SAP, which wanted to promote its BI software to business analysts. A little research revealed that business analysts are good at data discovery because they love a good mystery. We tapped into this with an integrated direct mail and online campaign that challenges analysts to catch the thief behind a fictitious casino heist.

Sure, titles are handy. They’re a convenient way to refer to a group of people who perform similar jobs while in the office. But don’t forget to think about what drove them to those jobs in the first place. You might just find that a saltshaker points the way to a software sale, or that a casino heist is the way to steal an analyst’s heart.